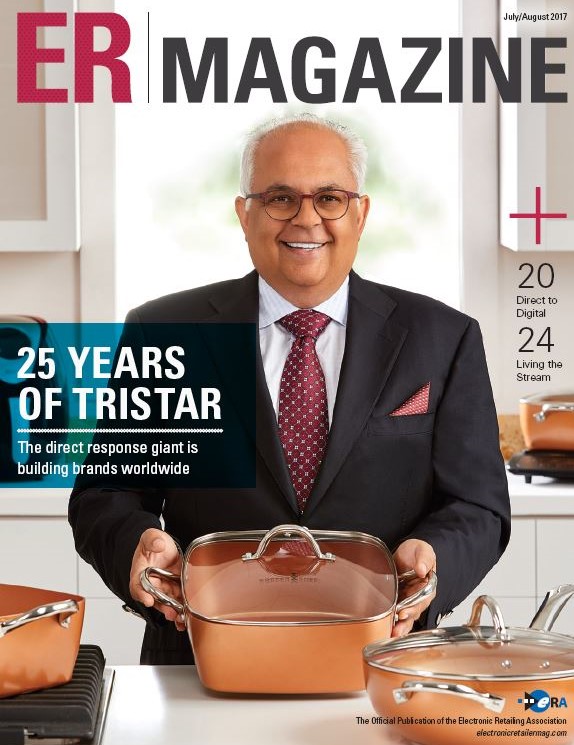 Tristar Products, Inc., the direct response powerhouse based in Fairfield, N.J., is marking an incredible 25 years in business this year. In that quarter-century, the company has produced and marketed some of the most successful products in the industry’s history—and it’s not going to stop anytime soon.

In fact, 2016 was Tristar’s best year ever. Propelled by a wave of new products such as the Power Pressure Cooker XL, the Flex-Able Bungee Hose, and the Copper Chef Cookware line, Tristar logged record revenue. Although the privately held company is reluctant to provide exact figures, executives anticipate another record year in 2017, generating $1 billion in retail sales.

This represents exponential growth from 2014, when Tristar posted $333 million in revenue and made the Inc. 5000 list of fastest-growing companies—and a long way from where it started in 1992, when CEO Keith Mirchandani launched the company with little more than a vision.

“The secret to Tristar’s success is not really a secret,” Mirchandani says. “It is more of a discipline. Products are evaluated on one key measure: Does it solve a problem that many people have, and will it give them an easy, valuable solution for a reasonable price? We are in the business of solving problems for massive amounts of everyday people, and when we find a solution that meets those criteria, we can develop it from start to finish.”

The company hit the ground running with winners such as the Hook & Hang closet organizer, the Steam Buggy cleaner, and the Banjo Minnow Fishing System. Generating millions in sales, those items paved the way for Tristar to bring more products to market.

The Ab Roller put the nascent company on the map. “[It] took the nation by storm and possibly made more six-packs than Budweiser,” Mirchandani quips. “Its growth was in the promise: People want great abs. They’re the Holy Grail of fitness, but they’re hard to develop.”

It and a follow-up product, the Ab Sculptor, have generated more than $1 billion in retail sales since 1994.

These and other Tristar products helped create whole new categories for DR. For instance, the Jack LaLanne Juicer made such appliances a major profit center for retailers. Tristar was also able to resurrect a moribund kitchen appliance and category by making it “one-touch easy” with the Power Pressure Cooker, expanding appeal beyond grandma’s stovetop stews.

More recently, the Flex-Able Hose was an instant success with consumers, and it brought As Seen On TV products into retailers’ garden departments. The Genie Bra offered a unique combination of comfort, lift, and support that helped make it the No. 1 selling seamless bra in the world—and a staple in mass-market retailers’ apparel sections.

Contributing to many products’ saleability was a unique format Mirchandani pioneered for Tristar infomercials to soften the offer and build a bond with consumers. Dubbed the “talk-mercial,” the long-forms combine the best attributes of a talk show—considered a credible source of information and entertainment—with an infomercial’s compelling pitches and offers.

“At the time, most infomercials consisted of non-stop pitching for a full half-hour,” Mirchandani says. “The problem with a non-stop, 30-minute pitch can be [a loss of] credibility and the ability to make a true, believable connection with the viewer.”

He recruited some of the most recognizable talk show hosts to pitch products in long-form talk-mercials. Montel Williams and Joan Rivers gave products in the Living Well with Montel and Joan Rivers Beauty lines instant credibility, enhancing their endorsements with detailed demos and irresistible offers.

“Tristar favors this formula because it builds the trust of the consumer first, then ‘wows’ them with demonstrations of the product, and finally converts them with a fantastic offer,” Mirchandani says.

Tristar also matches its star promoters with the products that suit them best. “The selection of the right celebrity can be the difference between enormous success and product failure,” Mirchandani says. “The secret is not simply to pull in a celebrity who has some name and recognition value. The key is to find a celebrity who is relevant to the product, so that their endorsement has more merit and credibility to the viewer.”

The Jack LaLanne Juicer line is a prime example. “We [tapped] a well-known celebrity who was an expert and advocate in healthy nutrition,” Mirchandani says. “Having Jack’s name and endorsement behind our juicer gave it instant credibility. This is one of the keys to its nearly instant success.”

The late LaLanne was just one celeb in Tristar’s stable. Stylist Maria McCool pitches the Perfecter Fusion Styler, an invention of her own. Fitness expert Brenda DyGraf pitches the Ab Roller, Lateral Thigh Trainer, and Air Climber. Fitness trainer Denise Austin joined Tristar to bring the Pilates and Yoga Trainer to market, and the legendary Billy Mays pitched products such as the Turbo Tiger Sweeper.

Over time, Tristar has built these and other successes into brands in order to expand its reach on the retail shelf. “We try to develop families of products,” Mirchandani says. “That way, we get more shelf space in the store, and get into different parts of the store.”

Many of Tristar’s releases defy categorization. Instead of producing inexpensive one-offs, the company develops lasting brands and backs them with long-form DRTV. “Most of our products don’t fit into the As Seen On TV section—not with our pricepoints and the larger cube size of most of our products,” Mirchandani told HomeWorld Business in 2010. “We are all about building long-term brands.”

Most recently, the company has experienced success with Copper Chef Cookware. Launched as a small set of square copper pans with nonstick ceramic surfaces, the line now includes a Perfect Cake pan, Copper Bake and Grill Mats, and an Induction Cooktop, among other items. All are selling briskly, alongside the ongoing endorsement and recipes from celebrity chef Eric Theiss.

“We use television advertising to make our housewares products the No. 1 brand in the marketplace, [then] start developing a ‘family’ of products around that,” Mirchandani says. “Next, we go into major retailers like Walmart, Bed Bath & Beyond, and Kohl’s, and get a whole department of our products. Through the power of TV, we create brands.”

Elaine LaLanne and Keith Mirchandani bump fists at a 2014 event celebrating what would have been Jack LaLanne’s 100th birthday.

One reason that Tristar is able to manage brands is that it is almost completely vertically integrated. The company will take an idea, partner with the inventor, develop the concept, create a prototype, produce the commercial, buy media, source manufacturers, market the product, and distribute it to retailers throughout the world.

Its engineering department can quickly turn an idea into a prototype. “I did my first prototype with a bent paperclip,” says Ab Roller inventor Don Brown. “Tristar engineers turned it into the Ab Roller, and now it’s the No. 1 fitness product in the world.”

Spots, infomercials, and additional video content are shot at Tristar’s state-of-the-art, 65,000-square-foot production facility. The facility required a massive investment in soundstages, equipment, editing bays, and talent, the company says, but it pays off every year in efficiency, speed, quality, creativity, and cost control.

“We’re the only direct response company in New Jersey that has its own studios,” Mirchandani says. “Because of that, we are able to react a lot faster than anyone else in the market. Revisions and changes can be almost instantaneous. New ideas come alive in days, not weeks. And production costs can be controlled and minimized.”

The company continues to produce and air more long-form ads than spots, even though it produces a lot of spots. It is also experimenting with ads that don’t include a “Buy now” call to action with an 800 number or web address. Tristar has even dabbled in motion pictures with the release of The Godfather of Fitness, a documentary short profiling fitness legend Jack LaLanne. The film was chosen to premiere at the prestigious Tribeca Film Festival in New York, N.Y., in 2017.

Some Tristar brands live on long after their endorsers leave the mortal coil. “Jack [LaLanne] once said, ‘I can’t die. It would ruin my image,’ ” the company noted following his death in 2011. “Tristar will continue to market Jack’s line to keep his image and healthy living message alive.”

The web was still in its infancy when Tristar opened its doors, but the company has adapted quickly to changes in media and consumer behavior to reach consumers in a multichannel marketplace. After online shopping debuted in the mid-1990s, “the internet picked up a higher percentage of sales year after year,” Mirchandani says. “Television was still the driving force, but viewers chose to go to a website and order, rather than call.”

Today, it is no longer a matter of making sure to have a compelling spot and a friendly operator standing by. “People are not watching television the way they used to,” Mirchandani says. “The younger generation has a phone, computer, and an iPad on all at once. When the commercial plays, they think, ‘I’ll check the website right now.’ That fact requires us to adapt our strategy constantly.”

Tristar increasingly concentrates on turning digital and social media into profit centers. The company has extended its efforts to websites, social media promotions, YouTube videos, and mobile marketing. “It is important that Tristar can touch a consumer on just about every device, screen, and app they choose to view,” Mirchandani says. “We have even dabbled in text marketing.

A long-form for the Power Pressure Cooker XL touts its ease and efficiency.

“We have embraced the new technologies and are maximizing our efforts to understand consumer viewing trends,” he adds. “We need to be able to reach out and touch consumers in any media environment. Shopping behaviors have changed, and we must market as strategically on Amazon, social media, and throughout the digital world as we market on television and streaming [services].”

Tristar has had success with recipe videos for its cookware products and recently collaborated with social video specialist Cooking Panda for Copper Chef, creating a video that quickly garnered more than 1.4 million views. In another successful social media promotion, for the Power Pressure Cooker XL, former WWE wrestler Gene Snitsky starred as the Turkey Dude, gaining more than 500 million impressions in a series of lighthearted webisodes broadcast on YouTube, and appearing at various PR events.

“Since social media responds to comedy, we dreamed up Turkey Dude to make this promotion informative, fun, and entertaining,” says Norah Alberto, Tristar’s director of global brand communications. “Even kids had fun watching the webisodes.”

Digital technology is also helping to dial in specific types of customers. “Depending on the product category, 50 to 70 percent of orders now come in through the web,” Mirchandani says. “There are extra opportunities because of Amazon and Facebook throughout the world. We drive a lot of traffic through Facebook advertising, because you can really target a specific audience and really hone in on what works for the product.”

While the company has products in aisles and outlets throughout the world, it doesn’t promote its own brand; instead, the product line—Genie Bra or Copper Chef, for example—is the name the consumer recognizes. “But retailers know who we are,” Mirchandani says. “We advertise the product itself, like Procter & Gamble advertises Crest. Competitors’ products come and go, but ours stay for years to come. We’ll sell a product for the life of the patent.”

Tristar plans to build its established brands for the foreseeable future, as well as find new and innovative products to bring to market worldwide. “The challenge of the future is to achieve the proper strategic balance between existing brand growth and expansion, and introduce new products with enormous potential,” Mirchandani says. “This is more of an art than a science.

“At the same time, we must also change our traditional approach to marketing and embrace the opportunities offered by the ever-evolving digital and social media universe,” he says. “Tristar’s next big challenge is mastering the new media and digital universe to remain ahead of the curve as new consumer behaviors and viewing habits evolve.”